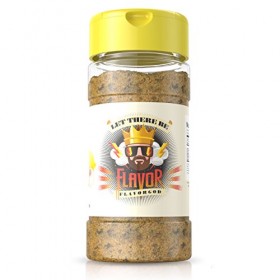 I love lemon and garlic and so will you. The highlights in this seasoning aren't only the genius pairing of citrus and pungent tang. Lemon and garlic share the spotlight with other amazing flavors. Onion, basil, thyme, parsley and other herbs & spices give this seasoning the perfect balance for every dish! So you're trying to impress your family and friends by showing them you're ACTUALLY a FlavorGod chef now and know how to make amazing dishes. Don't worry! Lemon Garlic Seasoning has your back. You'll keep everyone loving that pinch of epic flavor that will have them wondering how you became a kitchen master. I can't say you should try to get on Top Chef or quit your day job...but Lemon Garlic Seasoning will definitely increase your dinner party swag by at least 650%. END_OF_DOCUMENT_TOKEN_TO_BE_REPLACED 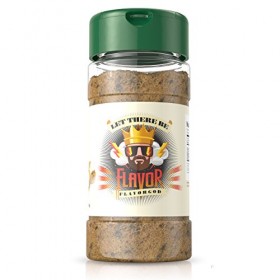 I love garlic and so will you. Of course this seasoning features Garlic but it also shares the spotlight with other amazing flavors and very little salt. Onion, basil, thyme, parsley and other herbs & spices give this seasoning the perfect balance for all your dishes! You know that moment when you invite someone over to your house for the first time and you really want to impress him or her? So you decide to cook, because who knows, maybe you'll get lucky. Add this to your bag of tricks and you WILL get lucky. This Garlic Seasonings is guaranteed to get anyone in your house excited and feeling all warm and fuzzy inside. I'm not guaranteeing that you'll close the deal, I'm just saying using this in your kitchen for that first impression will increase your chances by 475%. Trust me, it works. END_OF_DOCUMENT_TOKEN_TO_BE_REPLACED 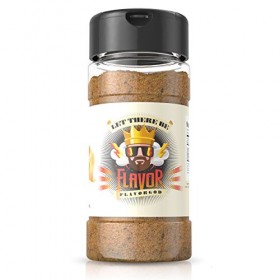 Everything seasoning? Yes, this seasoning actually takes everything to the ultimate level of taste! With hints of onion, garlic, cumin, and paprika this seasoning has every depth of flavor balanced with a light BBQ flavor. Everything seasoning is great on ALL protein dishes, veggies, and every preparation lacking that missing epic essence. What are you cooking today? Actually, it doesn't matter what you're cooking today if you have this in your house. See EVERYTHING you put this on, turns into tastebud gold. Don't argue with me, I've spent 300 years working on this seasoning and perfecting it's blend, Colonel Washington had this in the field of battle, that's how we won the war. When he passed this bad boy out to Congress in 1798, they liked it so much he was elected President of the United States, don't believe Me? Look it up. You Need this. END_OF_DOCUMENT_TOKEN_TO_BE_REPLACED 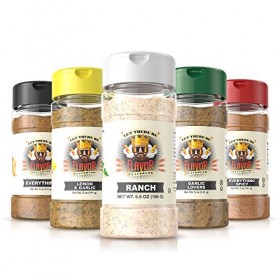 Ranch seasoning is one of those flavors I remember enjoying as a kid. My limited edition Ranch seasoning You will enjoy flavors like: fresh garlic, herbs, pepper, and an aromatic finish of sweet onions that resonate like a freshly made Ranch seasoning. END_OF_DOCUMENT_TOKEN_TO_BE_REPLACED 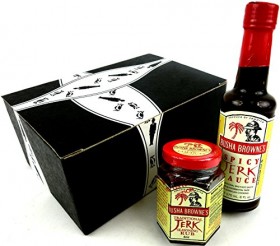 About This BlackTie Box: Introducing the BlackTie Box by Black Tie Mercantile, the first and only gift-ready packaging system designed for the unique challenges of E-Commerce. Whether you choose to ship directly to a recipient or to yourself, your item is guaranteed to arrive exactly as described and photographed. Howe Peter Browne, 2nd Marquess of Sligo, returned to Ireland in 1836 with fond memories of the flavorful dishes he had enjoyed during his time as governor of Jamaica. The Marquess had spent his governorship supervising the emancipation of Jamaica's slaves and the subsequent sale of estates by financially ruined planters to local managers known as Bushas. Charles Adolphus Thorburn Browne, a descendant of the Marquess, founded Busha Browne after working tirelessly from centuries-old recipes found in the family archives to reproduce authentic Jamaican sauces, jams, pickles, and condiments. Busha Browne continues to preserve the rich heritage of Jamaican cuisine by preparing, bottling, and labeling their products in small batches in Kingston, Jamaica. Now get a BlackTie Box for any occasion featuring one 5 oz bottle of Busha Browne's Spicy Jerk Sauce and one 4 oz jar of Busha Browne's Traditional Jerk Seasoning Rub. END_OF_DOCUMENT_TOKEN_TO_BE_REPLACED 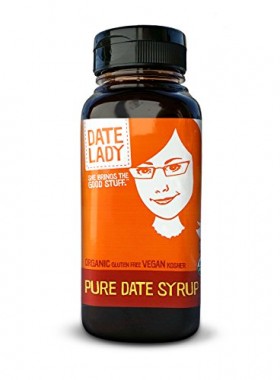 Back when civilization began, there was date syrup. Stone tablets containing the earliest documented recipes in existence portray this flowing fruit of the date palm as an essential sweetener in the ancient world. It was, and still is, a delectable, complex fruit syrup with a variety of uses and nutritional benefits. Its uses are many. The syrup's rich flavor makes for an ideal substitution to processed sugar in your favorite baking and cooking recipes. Use it also as a topping with anything that would normally go with honey or syrup. The benefits are also numerous. A mineral content including potassium, magnesium and iron, make this a great alternative to sweeten up recipes without adding sugar. Pour it over waffles or french toast. Dollop on greek yogurt or coconut ice cream. Drizzle over goat cheese and crostini. Use as an alternative to sugar in baking and cooking. Now you're in business. END_OF_DOCUMENT_TOKEN_TO_BE_REPLACED 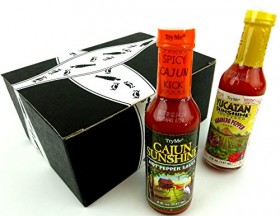 About This Black Tie Mercantile Signature™ Gift Box: Based in New Orleans, one of the world's great culinary centers, Reily Foods Company has been offering high-quality products for over 100 years. Founded by William B. Reily in 1902, Reily Foods Company began as a roaster, grinder, packager, and distributor of canned coffee products under the Luzianne brand. Since then, Reily Foods Company has continued to expand their offerings to include TryMe, an incredibly popular line of Cajun-inspired sauces. Now get a Black Tie Mercantile Signature™ Gift Box for any occasion featuring one 5 oz bottle of TryMe Cajun Sunshine Hot Pepper Sauce and one 5 oz bottle of TryMe Yucatan Sunshine Habanero Pepper Sauce. END_OF_DOCUMENT_TOKEN_TO_BE_REPLACED 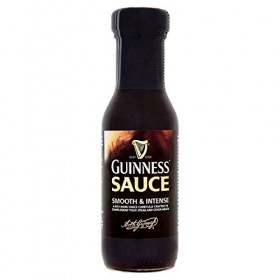 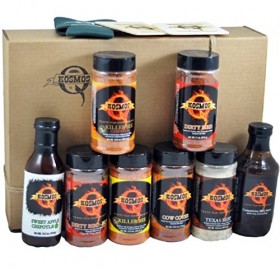 Product Description Kosmos Q began with the purpose of spending time with friends and family while doing what we love to do, barbecuing. Kosmos Q has grown into a thriving company that supplies nearly every top BBQ Competition Competitor in the country. Since the inception of our Competition BBQ Product lines in 2009 Kosmos Q has quickly became the leader in Barbecuing due to our commitment to customer satisfaction. We do not just rely on instinct we also rely on professionals that know what it takes to be the best as do. Kosmos Q has won multiple grand and reserve grand championships in the very competitive world of competition BBQ. With invites to the American Royal, Jack Daniels World Cook-Off, and the Chest to Chest world Brisket Cook-Off rest assure that we test every product before it is released to the public. From our specialized blending techniques to our state of the packaging facility we only ship the freshest product, so rest assure that you are being served by the industry leader and with try you will understand why it pays to use Kosmos Q products. END_OF_DOCUMENT_TOKEN_TO_BE_REPLACED 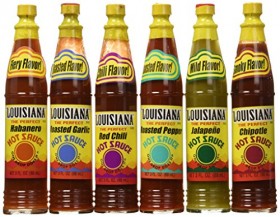 Sweet, lovely caramel sauce made with only three ingredients! END_OF_DOCUMENT_TOKEN_TO_BE_REPLACED 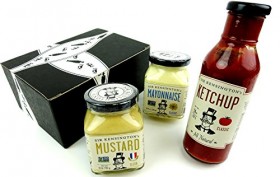 Sir Kensington’s Sauces 3-Flavor Variety: One 14 oz Bottle of Classic Ketchup, One 11 oz Jar of Dijon Mustard, and One 10 oz Jar of Classic Mayonnaise in a BlackTie Box (3 Items Total)

About This BlackTie Box: Introducing the BlackTie Box by Black Tie Mercantile, the first and only gift-ready packaging system designed for the unique challenges of E-Commerce. Born to a merchant family in Great Britain, Sir Kensington attended Oxford University for his course of undergraduate study, attaining degrees in mercantile trade, agronomy, and culinary arts. He began hosting summits and salons with various luminaries from across the Old and New Worlds alike, quickly realizing that the secret to a pleasing gathering was the gastronomic fuel on which it ran. At one such summit, the emperor of Japan presented the assembled guests with tender slices of Wagyu beef. Upon being served, Catherine the Great of Russia leaned toward Sir Kensington to request a side of ketchup. Baffled yet intrigued by the request, Kensington ventured to the kitchen, where he could find nothing acceptable for such a dish or such a diner. Undeterred, he set about to create, on the spot, a ketchup that would forever bear his name. And so the knowledgeable knight became a ketchup king, forever to be fondly favored for his flavorful findings. Sir Kensington's spice chronicles were feared lost until 2008, when Brown University students Scott Norton and Mark Ramadan uncovered them, filed away and forgotten, in the library's special collections. Enchanted by the simplicity of the lost recipes, Scott and Mark vowed to revive ketchup in the Sir Kensington tradition. A great success, the experiment yielded the first of many batches of this rare and exceptional formula. Uncommon, healthful, and painstakingly prepared, it could bear no other name than that of Kensington himself. Now get a BlackTie Box for any occasion featuring one 14 oz bottle of Sir Kensington's Classic Ketchup, one 11 oz jar of Sir Kensington's Dijon Mustard, and one 10 oz jar of Sir Kensington's Classic Mayonnaise. END_OF_DOCUMENT_TOKEN_TO_BE_REPLACED